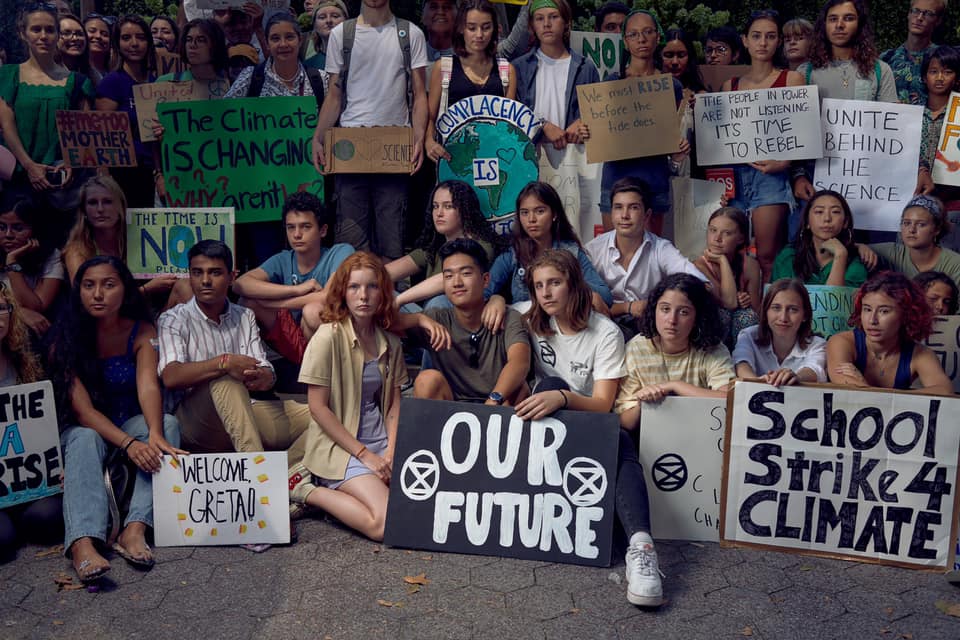 Join us for an evening of conversation with youth climate leaders to learn how to move their demands forward with the urgency required by the global climate crisis.

Sponsored by- The New York Society for Ethical Culture in partnership with Climate Reality NYC, 350NYC, and Drawdown NYC/Pachmama

We have organized a panel of youth climate leaders from Earth Uprising (Alexandria Villasenor), Earth Guardians (Xiye Bastida), Sunrise (Naomi Hollard), Zero Hour (Jamie Margolin), and XR Youth (Sophie Anderson). Following this moderated panel, there will be a Drawdown presentation by Dr. Katharine Wilkinson focusing on the impact and feasibility of these solutions to be scaled up worldwide and how the young people present can engage with and promote this project.

More Choose Us details will be announced.

For more information about the Climate Strike, visit strikewithus.org.

Sponsored by Blue Planet Foundation and presented in partnership with 350NYC, The Climate Reality Project, Project Drawdown, and the Pachamama Alliance. Former Vice President Gore is the co-founder and chairman of Generation Investment Management, and the founder and chairman of The Climate Reality Project, a nonprofit devoted to solving the climate crisis. He is also a senior partner at Kleiner Perkins Caufield & Byers and a member of Apple Inc.’s board of directors.

He is the subject of the documentary movie “An Inconvenient Truth,” which won two Oscars in 2006 — and a second documentary in 2017, “An Inconvenient Sequel: Truth to Power.” In 2007, Gore was awarded the Nobel Peace Prize, along with the Intergovernmental Panel on Climate Change, for “informing the world of the dangers posed by climate change.” Dr. Wilkinson is an author, strategist, and teacher, working to heal the planet we call home. Her first book, Between God & Green: How Evangelicals Are Cultivating a Middle Ground on Climate Change, was dubbed “a vitally important, even subversive, story” by The Boston Globe.

Katharine speaks internationally, sharing her expertise at Aspen Ideas, Skoll World Forum, Talks @ Google, TED Women, and through frequent media appearances. Her TED Talk on gender equity and global warming has more than 1.3 million views, and her writing has been published by BBC, CNN, and USA Today, among others. In 2019, Planned Parenthood honored Katharine as a “Legend in the Making.”

Katharine’s interdisciplinary background spans academia, business, and the social sector. Previously, she was Director of Strategy at the purpose consultancy BrightHouse and worked for The Boston Consulting Group and Natural Resources Defense Council. Katharine has taught at the University of Oxford and Agnes Scott College. She currently advises on Mary Robinson’s feminist climate podcast, Mothers of Invention, and serves on the boards of WildArk and Chattahoochee NOW.

Katharine holds a doctorate in Geography & Environment from Oxford, where she was a Rhodes Scholar, and a B.A. in Religion from Sewanee—The University of the South. She is happiest on a mountain or a horse. Her website is www.kkwilkinson.com. Sophie is co-national coordinator of Extinction Rebellion (XR) Youth US. XR Youth US launched in April 2019 and has rapidly spread to over 50+ locations across the country. Extinction Rebellion is a non-partisan international movement that uses non-violent civil disobedience in an attempt to halt mass extinction and minimise the risk of social collapse as a result of climate change. XR’s rapid growth has been propelled by youth activism. Sophie has over ten years of experience in advocacy and activism.

She has done extensive work with Juvenile Diabetes Research Foundation (JDRF) to advance toward a cure for Type 1 Diabetes, including meeting with congressional leaders, keynoting at the San Francisco One Walk, fundraising and mobilizing supporters. She is also passionate about social justice work, which has included creating an award winning documentary film titled ‘I am a Girl’ about gender inequity around the world. She has been involved in the climate change movement for five years and co-led a climate change conference in San Francisco this past spring.

Sophie is a junior in high school at the Packer Collegiate Institute, where she is a member of the varsity volleyball team. She recently moved to Brooklyn, NY from San Francisco where she attended the French American International High School. Xiye is a teenage climate activist based in New York City and one of the lead organizers of the Fridays For Future youth climate strike movement. For the first climate strike in March, 2019, she mobilized 600 students from her school and has taken a citywide leadership role in organizing climate strikes and speaking out about climate justice issues in rallies and town halls.

Bastida was born and raised in Mexico as part of the Otomi-Toltec indigenous peoples. She sits on the administration committee of the Peoples Climate Movement, where she brings the voice of youth to existing grassroots and climate organizations.

Bastida launched a youth activism training program to expand the climate justice movement and is a member of Sunrise Movement and Extinction Rebellion. In 2018, she was invited to the 9th United Nations World Urban Forum to speak about indigenous cosmology. She received the “Spirit of the UN” award in 2018. Naomi is a Franco-Caribbean organizer based in Philadelphia, PA. She graduated this year from Columbia University majoring in Neuroscience and Behavior. Naomi led out neuroscientific research all four years of college. Her fourth year, moved by Sunrise Movement’s powerful sit in November 2018 for the Green New Deal and scared that another destructive hurricane, fueled by climate change, could hit her family who live on the Caribbean island of Guadeloupe, Naomi started organizing through Sunrise Movement to stop climate change and create good jobs for ALL people.

In November and December 2018, Naomi organized office visits at Congressman Nadler’s office for the Green New Deal, and January 2019, she founded the Sunrise Columbia hub. She recruited over 300 members and organized 50 active members over the course of the spring semester. On March 15th, she organized a Climate Strike through Sunrise Columbia which hundreds of people attended and which hosted the governor of Washington Jay Inslee. She was interviewed by Columbia Spectator, the New Yorker, MTV, and the Years Project.

In May 2019, she helped officially recognize Sunrise Columbia as a Columbia University student group. She continues to work with Sunrise Columbia. Naomi is now a Sunrise Movement Fellow who leads out trainings throughout the US to help the youth become more effective at leading out actions and organizing for the Green New Deal. Jamie is a 17-year-old Colombian-American writer, community organizer, activist & public speaker. She is the founder and co-executive director of an international youth climate justice movement called Zero Hour that lead the very first “Youth Climate March” in Washington DC and 25+ cities all around the world during the summer of 2018.

She is also a plaintiff on Our Children’s Trusts’ Youth v. Gov Washington state lawsuit, suing the state of Washington for denying her generation’s constitutional rights to a livable environment by continuing to make climate change worse, and she is a climate justice organizer in her local Seattle community. Her debut book, “Youth To Power: Your Voice and How To Use It”, is hitting bookstores worldwide in 2020 A 7th grader who — frustrated by the lack of progress of the UN Climate Change Conference in Poland, and inspired by 16-year-old Swedish climate activist Greta Thunberg, Alexandria — became a national and international organizer for the first-ever global youth climate strike on March 15, 2019, mobilizing nearly 2,000 youths from 123 countries to demand climate action from their world leaders.

Alexandria was awarded the 2019 Tribeca Film Festival’s “Disruptor” Award and The Common Good Foundation’s Changemaker Scholarship and is on Politico’s list of the top 100 people influential in climate change policy. Alexandria continues in her role as a prominent climate strike organizer, and is working to bring accurate climate science and climate change education into K-12 schools. Council Member Constantinides represents the New York City Council’s 22nd District, which includes his native Astoria along with parts of Jackson Heights, Woodside, and East Elmhurst. He serves as chair of the Council’s Environmental Protection Committee and sits on six additional committees: Civil Service & Labor, Contracts, Cultural Affairs, Oversight & Investigations, Sanitation, and Transportation. Environmental policy has been a priority for Costa. The Council unanimously passed his bill to reduce carbon emissions 80% by 2050, now Local Law 66 of 2014. To help achieve this, Costa has sponsored additional legislation to encourage more use of solar, wind, geothermal, and biofuels.