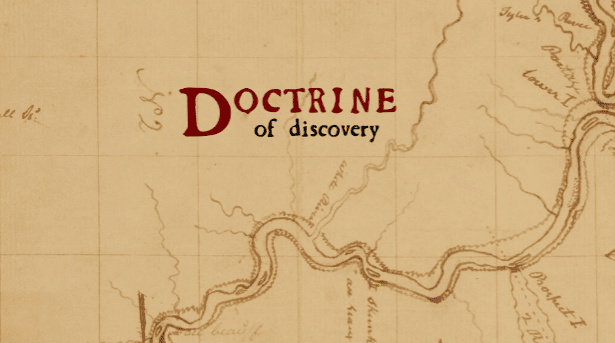 What is the Doctrine of Discovery? Why is it relevant in our world today?

In a nut shell, the Doctrine of Discovery, which is based on the Papal Bulls of the fifteenth century, is the origin of the European colonization, providing the answer as to why and how the actual degradation of peoples and nations began globally.

For me, as a historian, knowing this information serves to understand the context for why enslavement, genocide and ongoing suffering exists. It explains the imbalance of power which is supported and maintained by countries who claim to be democratic and justice seeking.  As Indigenous peoples work to decolonize, knowing the origin history helps to understand what is operating in our society and what needs to change.

I have made this my work because history matters. This is the mechanization of systemic subjugation which has remained in place for over 500 years. Unveiling this is akin to revealing the wizard behind the curtain. We are taught about Manifest Destiny, in order to participate in promoting it. That allows us to be in lock step with Empire; removing Indigenous peoples and clearing the land of them.  Our country does not teach this history, but uses this system to maintain power. Teaching this history helps people to understand why efforts to create a just society fall short. Unless we confront this reality, we will be at a loss to understand the systems which impact every aspect of our lived experience.

Theologically, the Papal Bulls are antithetical to the teachings of Jesus, who did not endorse stealing, subjugation or enslavement. His message lifted up and liberated the lowly, the oppressed, and taught us to welcome the stranger and to treat others with dignity and love. The Christian world follows the dictates of empire in conquering peoples and taking all of their possessions and land. In following Jesus, one would be more closely following the practices of Indigenous peoples, who worship God, lived communally and respected the earth.

Now that we are in a crisis with our earth, we are turning to Indigenous wisdom, the very wisdom that has been demonized for centuries by empire for pagan practices.  And as we are looking to access this wisdom, Indigenous communities are still under attack with threats to water sources and sacred sites. Our system of hierarchies run counter to practices of community. Our society needs reorientation and to stop the subjugation of vulnerable peoples and communities.  Will empire let go of its greed for resources and land in an effort to renew the practices of Indigenous peoples? Will they be willing to let go of their pre-conceived fears of The Other in order to save our world? These questions and many others need to be examined.

People can educate themselves by researching the Doctrine and its use in removing people’s possessions and land, connecting to the legislation which supports these practices and advocating for justice (Johnson V. McIntosh, breaking of treaties with Native nations, relegating Indigenous rights to ancestral lands to merely the right of occupancy). Many of the traditional writings of our flawed history need to be re-examined, unlearned, rewritten and taught in order to create a more equitable society. Our constitution needs to be rewritten in order to represent all people, not just land-owning men of European ancestry. The mainstream societies fragility around these issues and unwillingness to change, need to be addressed in order to make any progress. (Columbus was not a hero, the civil war was fought to end slavery, etc.).