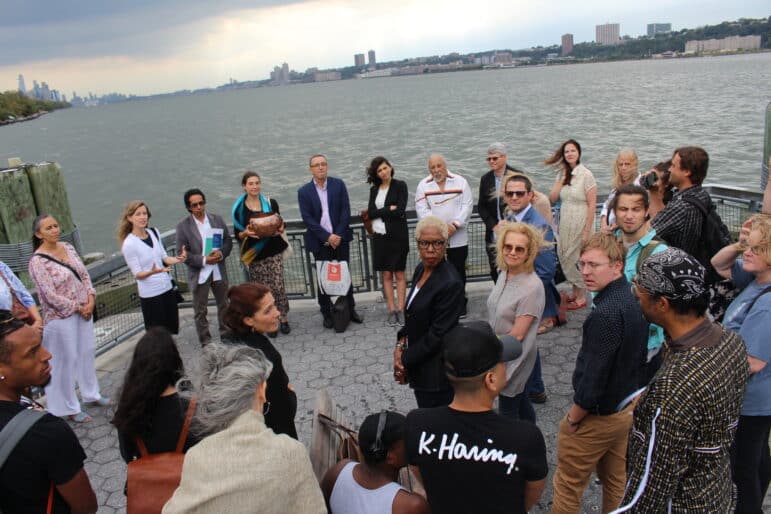 In a moving interfaith ceremony on September 26, those who protect the Hudson and Jordan Rivers joined with religious and indigenous leaders in an interfaith ceremony focused on tackling shared risks communities and ecosystems across the globe face from climate disruption.

The Sacred Rivers ceremony at the Union Theological Seminary’s James Memorial Chapel began with a welcome from Chief Dwaine Perry of the Ramapough Lenape Nation, who are original inhabitants of the region. The Lenape named the Hudson the Muh-he-kun-ne-tuk, the “river that flows two ways.” The ceremony highlighted how traditional, sacred, and secular concerns compel action and how communities of faith and environmental organizations can collaborate to reduce climate risk and build bridges of resilience at the local level.

Speakers at the event addressed the plights of both rivers as they face ongoing threats from climate change and development. EcoPeace Middle East — which has offices in Jordan, Israel, and Palestine with parallel staff in each office — gave a compelling presentation on the destruction of the Jordan River and their coordinated efforts to clean, revitalize, and bring sustainable development to the Jordan River and valley.

This was followed by a ceremony that combined the waters of the two rivers to signify connecting water from around the world and solidarity in fighting to protect it. Participants carried the ceremonial waters in a procession to the 125th Street Pier where they blessed and released them into the Hudson.

“It was a beautiful day that joined people from across the world, united in our fight to protect the water that sustains all of us; Mni Wiconi — water is life. EcoPeace Middle East is a testament to how working together we can perform Tikkun Olam (repairing the world). We really appreciate connecting with them around Climate Week and both our unified and diverse struggles.” said Jessica Roff, Riverkeeper’s Director of Advocacy and Engagement.

To see more photos and learn more about Riverkeeper…