In my Kamba tradition, it is said that when it rains, God is spitting onto the earth, in order to help the trees, vegetables, and grass grow for the animals to graze. This is why elders in the Kamba tribe spit on young people when giving blessings. For the most part, Ukambani, made up of three regions, Machakos, Makueni, and Kitui, is a dry region. As the Kambas were traditionally and historically traders, the nomadic lifestyle allowed many to survive on the land, as they were able to travel all the way to the coast on the East, as well as the great lake of East Africa on the West.
Unfortunately, when colonialism began in Kenya, many Kambas, as well as people from other tribes, were no longer able to practice their traditional form of trade, and so relying upon their ancestral land for year long sustenance became a practice that many had to adapt to. There is no large river in Ukambani, but there are streams which flow from the West, Eastward. For many, these streams are the main source of water which is relied upon, unless the rains are not in bounty. For the wealthy, who can afford to dig down into their land for water, the use of boar-holes is not always beneficial as the water in Ukambani is very salty. The option which has served much of Ukambani, both rich and poor, is the use of gigantic tanks which are connected to the rain gutters of homes and collects rain water. During the rainy season, from September to November, the tanks are able to be filled to capacity, and then support entire families for an entire year, just as long as God spits down sporadic blessings throughout the rest of the year.
Many years ago, maybe five, there was a terrible drought in Kenya. My uncle Tony, who takes care of the Kasinga family farm in Makueni wasn’t able to grow a single thing, and to this day, is still working to rebuild the farm to its former functionality. Drought, however inconvenient, is something all Kenyans are used to and understand — despite the great fissure of land knowledge which has occurred with the past 100 year of European influence in Africa. We have been very lucky this year: coming back to Nairobi, one only needs to see the leaves in the trees and the deep brown of the soil to know that there were great rains. And here in Kenya, just yesterday, in the beginning of January, what all of us in Kenya understand to be the driest season, it rained. For generations, the tribes of central Kenya have always known that it never rains in January. Some -particularly those who are connected to indigenous ways- understand that this anomalous weather is because of a global climate crisis. However, most (especially those who practice Christianity) see this unseasonal rain episode as a blessing. Who’s going to be ungrateful of rain?, they claim.
When one reflects on what is going on in our neighbor country of Somalia, it would be simple to say that Kenyans do not have much of a water issue. For the most part, that would be true. Our water problem however, has to do with the same cause of problem for Ramapough Lenape in Mahwah, and the Standing Rock Sioux: late era capitalism. Despite shortages which can last up to a week, and the need to buy drinking water–or at least to heavily filter and boil all water–water in Kenya is quickly being seen as a commodity rather than a necessity. Even beyond the dozens of treated water bottle companies, who are also adding to the issue of plastic pollution, it seems as though corporations, and private investors international and domestic, are incredibly interested in the water grab, which we all know only leaves people more vulnerable than secure.
Thinking up solutions to this problem, it would be easy for me to think that the solution for Kenyans would be to educate them on the importance of our interconnectedness in nature, but it’s not that simple, and maybe not the most appropriate of approaches. For over 400 years, Africans have been understood as primitive beings, more closely related in genetics to wild animals than the dignified European living in the city. It is for this reason that we are called monkeys and baboons, and asked offensive questions about whether we live in the jungle, wear shoes, or have lions as pets. When Pier Paolo Pasolini, in the 1960s wanted to make a film out of the myths of Orestes, he sought out what he thought would be the last untouched place on earth to be his setting-Africa. In fact, many Africans throughout the continent were offended by the director’s ignorance and perpetuation of a violent narrative which Europeans have used for nearly half a millennium to subjugate and enslave Africans. I believe that it is this mindset that is in need of changing.
For the sake of surviving in these times when money is God, King and ruler, education–not nature and her wisdom–is considered to be the saving grace of most Kenyans. It is prayers to Jesus rather than stewardship of the Earth which ensure long term sustainability of a family’s prosperity. Though it’s easy to blame the Europeans for many of the problems going on in Africa–to the point that the discussion becomes unproductive–I have no trouble placing blame on the Europeans for our water–and all around nature–crisis. Living under western hegemony, Africans must be as Un-African as possible in order to have the skills necessary to live under late capitalism. As the agrarian lifestyle of communities was done away with when British colonists stole hectares of indigenous land, the agrarian lifestyle isn’t even a reality for many. The water crisis Kenyans are dealing with now, with European theology as agent, has less to do with shortages, and more to do with privatization and spiritual disconnect. 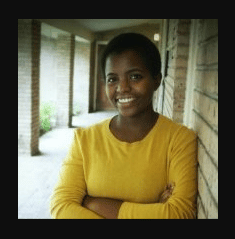 Katilau Mbindyo is a second year M. Div. Student at Union Theological Student who is doing her Field Education at the Center for Earth Ethics.