A few weeks ago I went to Recife at the invitation of Brazilian environmentalist, Alfredo Sirkis, on the occasion of the Brazilian Climate Change Conference. Named for the stone reefs in the Atlantic ocean off its shores, Recife is the largest city in the Northeastern state of Pernambuco.

As in the United States, there is denialism at the top of the government, but real movement to address the climate crisis on a subnational level. The Mayor of Recife, Geraldo Júlio who serves as regional chairman of a consortium of local governments for sustainability (ICLEI) and was the first mayor in South America to declare a climate emergency and is working on a transition to 100 percent renewable energy. Sirkis has been working on emissions reductions commitment from Brazil’s governors. He recently spoke alongside some of them (as well as some governors from the Peruvian Amazon) at the Vatican, one day after the Amazonian Synod. This is all happening during a surge in deforestation (and the related phenomenon of forest fires) which Philip Fearnside, a scientist at Brazil’s National Institute of Amazonian Research in Manaus says “results both from the constant anti-environment rhetoric and from concrete actions in dismantling the country’s environmental agencies and effectively halting fines for illegal clearing.”

Sirkis is formerly chair of the Brazil Climate Change Forum (Bolsonaro fired him) and currently head of the Brazilian Climate Center. My role was to participate in an interfaith ceremony and panel discussion on November 8th that was held at the oldest synagogue in the Americas, Kahal Zur Israel. Sirkis also invited his friend, the extraordinary Rabbi Nilton Bonder of Rio, and he worked with other organizers to invite Catholic, Evangelical, Muslim, Candomblé and Indigenous faith leaders (in the end the Muslim representative was unable to attend unfortunately).  Thanks to a friendship with his daughter, Anna, who lives in New York City, I know something about the family history. Alfredo has recently made a documentary about his mother Liliana’s journey fleeing her native Poland in the 1930s in the context of the genocide of Jewish people to which his family was subjected.

Kahal Zur Israel synogogue, which now functions as an intimate museum with original artifacts, was established in around 1636 by Sephardic Jews who had fled from Spain and Portugal to the Netherlands during the Inquisition and then came over with the Dutch.  The Dutch ruled Northeast Brazil from 1630-1654 and the Dutch West India Company made its headquarters in Recife. When the Portuguese took over again and expelled Jews from Recife in 1654, the Kahal Zur community fled to, among other places, “New Amsterdam,” my hometown. Over the next centuries, some returned, along with Jewish immigrants and refugees from around the world.

The Interfaith ceremony became highly charged, provoking a stark awareness about the connection between religious persecution and climate disruption. But it began gently. Rabbi Bonder spoke of heeding signs and listening and sang beautifully. Later that evening he would return to Kahal-Zur Israel to lead a service. Pastor Paul César, a Baptist pastor, spoke from the heart about the need for stronger voices from the Protestant community, advised that we ask forgiveness from Creator and Creation, and told the story of bringing his wife and four daughters back to the remote area of Brazil where he was born on order to show them the river he used to cherish, only to find it degraded and depleted: “we are destroying our own home,” he said. He spoke of the misinterpretation of Genesis and the problematic reality that when the mission of the church is to save souls for the afterlife, we ignore our home here. He also invoked Dorothy Stang, a Catholic sister originally from Dayton Ohio whose advocacy for the rural poor and the rainforest caused her to receive death threats from land owners and loggers, and who was murdered in the Brazilian Amazon in 2005. “We need to develop new leaders,” he said in closing.

It was then that Mãe Beth de Oxum of the Candomblé community heightened the volume and shifted the energy. She said that it was the first time she had been invited to a synagogue and she took it as a good sign. She said that her ancestors came from Africa and brought oral traditions and that they always knew the sacred dimensions of nature. She spoke of the Orishas, especially Yemanja and Oxum. She said the Earth womb is the first uterus. She said they sing to the leaves and the ocean and more and raising her voice, she said “we don’t get respect for our sacred traditions.” She spoke passionately and at length about the demonization of her community and implored those present to stand in alliance with them. She received standing ovation. Father Fábio Santos, who spoke next, invoking Pope Francis’ Laudato Si, gave her a clear statement of support.

The Xukuru are an Indigenous first nation of Brazil who have been fighting for the right to their ancestral land in Pernambuco; Jacqueline Xukuru spoke with jarring clarity about the clash of belief systems that is still playing out from time of conquest: “We do not see the Earth as a subject of financial speculation,” she said, “it is our body, our spirit.” She referenced the incendiary and outrageously disrespectful things that the current Brazilian President has said about Indigenous peoples, as well as his moves to dismantle the official department for Indigenous affairs (FUNAI).

“Progress for who? Development for who?” These questions seem to be at the heart of our global ecological crisis.

The most striking part about her talk was the omnipresent and imminent violence against Indigenous peoples. Just days before our gathering, there was another murder—Paulo Paulino Guajajara, a member of the Guararaja tribe and the organization Guardians of the Forest. “We will keep up the resistance until the last Indigenous people are here,” Xukuru said, and referred to a global campaign: Indigenous Blood: Not One Drop More. She questioned all the actors who make moves on land and water without consulting Indigenous peoples: “Progress for who? Development for who?” These questions seem to be at the heart of our global ecological crisis.

Listening to these speakers in this synagogue, it was poignant to recall that it was the same powers who ordered the Inquisition to purge the Jews and Moors from Spain and Portugal who worked with the Vatican to craft the papal bulls that divided the world for Spanish and Portuguese explorers. When the Portuguese established Recife in 1573, it soon became the first slave port in the Americas. These bulls proclaimed that the original peoples of Africa and the Americas were merely part of the flora and fauna to be “conquered vanquished and subdued.” Many see this same mentality present in both the climate denial and bigotry of today. At one of the conference side events I attended at the SinsPire Center, a young Guarani man named Mirin Juyan noted that some current Brazilian leaders have called Indigenous peoples “animals.” He explained that this is especially odd because in his traditional way, animals are our relatives rather than hallmarks of a lesser category of being, adding “I would rather be an animal than a destroyer of life.”

“I would rather be an animal than a destroyer of life.”

The prophetic voice of Pope Francis (the first pontiff from Latin America) in the climate conversation also calls to mind some echoes of Recife’s past. Dom Hélder Câmara, the Archbishop of Olinda and Recife from 1964-1985, is now officially on the path to canonization. He endured increasing resistance to his work with and for the marginalized people of Brazil and famously said “when I give food to the poor, they call me a saint, when I ask why they are poor, they call me a communist.” He attended all four sessions of Vatican II and was instrumental in the drafting of Gaudium et Spes, the Pastoral Constitution on the Church in the Modern World (Pope Paul VI, 1965), which is quite worth reading. One passage points out: Our era needs such wisdom more than bygone ages if the discoveries made by man are to be further humanized. For the future of the world stands in peril unless wiser men are forthcoming. It should also be pointed out that many nations, poorer in economic goods, are quite rich in wisdom and can offer noteworthy advantages to others. Câmara also founded a Theological Institute where he taught alongside feminist theologian Ivone Gebara for 17 years.

My trip also included the opportunity to encounter the mangroves, the fragile ecosystem that nurtures life and sequesters carbon, eat Brazilian food, enjoy music and truly warm and gracious hospitality across the board. Many Brazilians expressed concern over the recent oil spill of the Northeastern Coast not too far from Recife, still apparently mysterious in origin, but most everyone seemed to be continuing to enjoy the fruits of the sea. Finally, right before I left, I was able to visit an extraordinary collection at the Ricardo Brennand Institute featuring European art and artifacts, some of which the collector brought from Europe, others which were created by Europeans in Brazil. This includes illustrations of the land and people of Brazil done centuries ago, infused with all the “Old World” preconceptions and raw wonder one might imagine.

One gallery is focused on the period of Dutch occupation of the Northeast and includes the largest collection of the work of Frans Post, who is acknowledged as the first European landscape painter in the Americas. He was from Haarlam, in the Netherlands. Union Theological Seminary is in Harlem—or rather on the border of “Morningside Heights” and Harlem, where gentrification is a major issue— and I took this occasion to learn the roots of the word in Dutch. Apparently it is traceable to haarlo-heim, meaning a home in a forested elevated place. The Lenape people lived in Harlem – and all of “Manahatta” – when the Dutch West India Company arrived there in 1624. One benefit of our time is the incredible surge in awareness of the layers of history that we live in.

One benefit of our time is the incredible surge in awareness of the layers of history that we live in.

We are far behind the goals of the Paris Agreement and, seen through that lens, we appear set on a trajectory to ecological collapse. For all of us, we must face the feeling of doom that visits the climate conversation at least as often as the feelings of rage, grief, disbelief and inspiration do. But we must also realize that there is more going on than meets the eye. The force of history can feel as indominable as the many tons of carbon pollution that scientists tell us is now stuck up in the atmosphere for centuries, no matter what we do now. But that cannot be the only way to look at it. There are physics at work, but there are also metaphysics, and one can feel them palpably in Brazil. As another native of Recife, Pedagogy of the Oppressed author and legendary movement-builder Paolo Friere wrote: “It is necessary that the weakness of the powerless is transformed into a force capable of announcing justice. For this to happen, a total denouncement of fatalism is necessary. We are transformative beings and not beings for accommodation.” I am grateful for my time in Brazil in which I felt that force gathering, inviting all of us into transformation together. 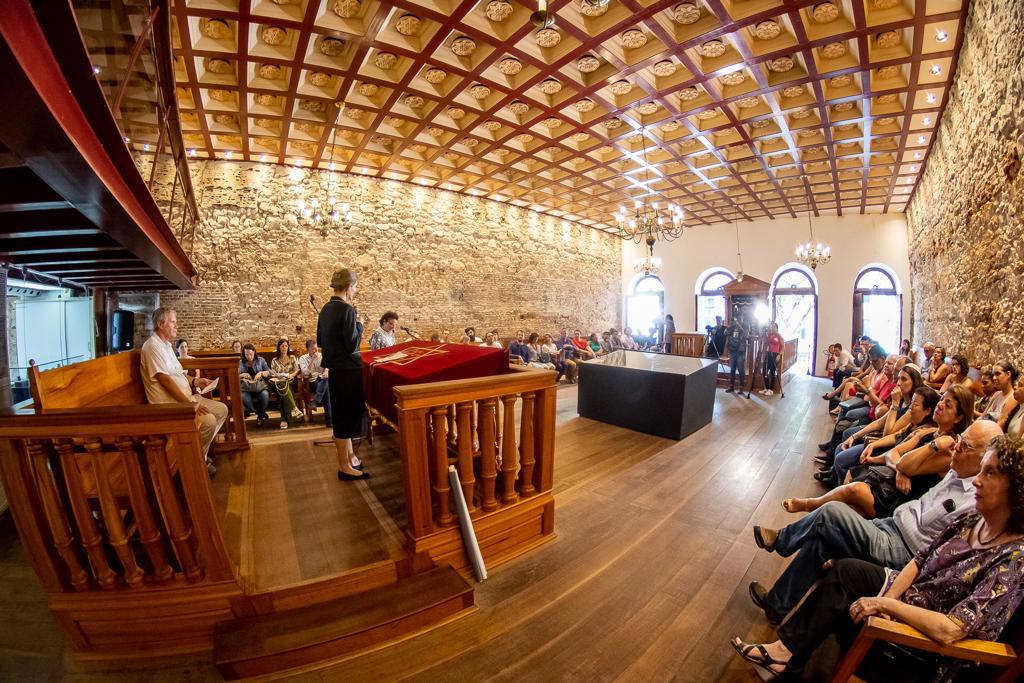