“Most politicians see the Jordan River as a border,” Bromberg said “We see the river as a bridge.”

For environmentalist peacebuilders in the Middle East, solving the climate crisis & the conflict go hand in hand. An interfaith water ceremony here showcased their unique approach.

New York City — Experts have long argued that the only way to effectively address the climate crisis is via a concerted, intergovernmental approach. It’s the issue world leaders and policy makers were in New York City to discuss at the United Nations Climate Summit last month and during a series of breakout sessions spread out over the week.

Among the over 150 Climate Week (Sept. 23-29) events and panel discussions, one particular one stood out for its unique approach. Faith leaders and environmentalists from the Middle East and New York came together at the Union Theological Seminary in Harlem for an interfaith water ritual ceremony to honor the shared risks communities and ecosystems face due to climate disruption.

The event was a collaboration of Hudson Riverkeeper, an environmental group that advocates for the Hudson River and its tributaries, the Center For Earth Ethics at the seminary and EcoPeace Middle East, an environmentalist peacemaking NGO with Israeli, Jordanian and Palestinian directors.

Under the towering stained glass windows of the James Memorial Chapel, Karenna Gore, director of the Center for Earth Ethics, spoke of the importance of inter-community work and honoring the spiritual aspects of our shared water sources, both the Hudson and Jordan rivers. “This is holy and sacred work, and this gathering is powerful,” she said before welcoming Chief Dwaine Perry of the Ramapough Lenape Nation to share his community’s connection to the Hudson and surrounding land, their ancestral territory.

“Through our lack of connection to the land and the water and our drive to take and build and exploit, we … have ripped so many literal and figurative holes in the world,” Jessica Roff, director of advocacy and engagement at Riverkeeper, said. “From drilling fracking wells across the country, to tunneling pipelines under rivers, to allowing poisons in people’s drinking water, to damming rivers, to blasting giant quarries and then storing toxic materials in them. We have a lot to repair.” 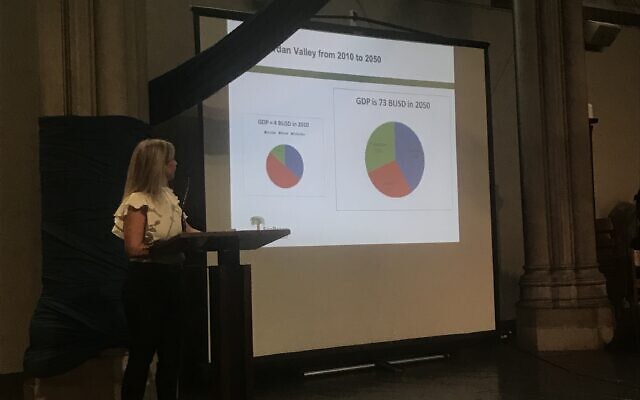 Gidon Bromberg, who as the Israeli director of EcoPeace Middle East has made this work his mission over the last 30 years, said it’s no coincidence that the Jordan River is holy to all three Abrahamic faiths. “For Jews the river is a place of miracles, for Christianity it’s the place where Jesus was baptized and for Islam it’s the place where several of the companions of Mohammed are buried.”

Now both rivers are suffering from ecological collapse due to climate change and over-development.

Back uptown in the chapel, Bethany Yarrow (daughter of Peter Yarrow) shared a moving musical piece honoring the life-giving nature of water. Later, Rabbi Burton Visotzky, a professor at Jewish Theological Seminary, noted the importance of water in Jewish liturgy and read the prayer for rain Jews recite at the end of Sukkot: “May it be for blessing and not for a curse; may it be for life and not for death; may it be for abundance and not scarcity.”

The environmentalists and faith leaders huddled around a bowl in the center of the chapel and poured from chalices that held water from the Hudson and Jordan rivers.

“It’s a symbol of blessing and to remind ourselves that we are all one,” Gore said.

In typical New York fashion what had been a beautifully sunny day turned grey and windy as the group, a motley mix of environmental activists many who came seeking a spiritual addition to their packed itinerary of Climate Week events, proceeded out of the seminary, down Riverside Drive and west a few blocks to a pier extending onto the Hudson River. 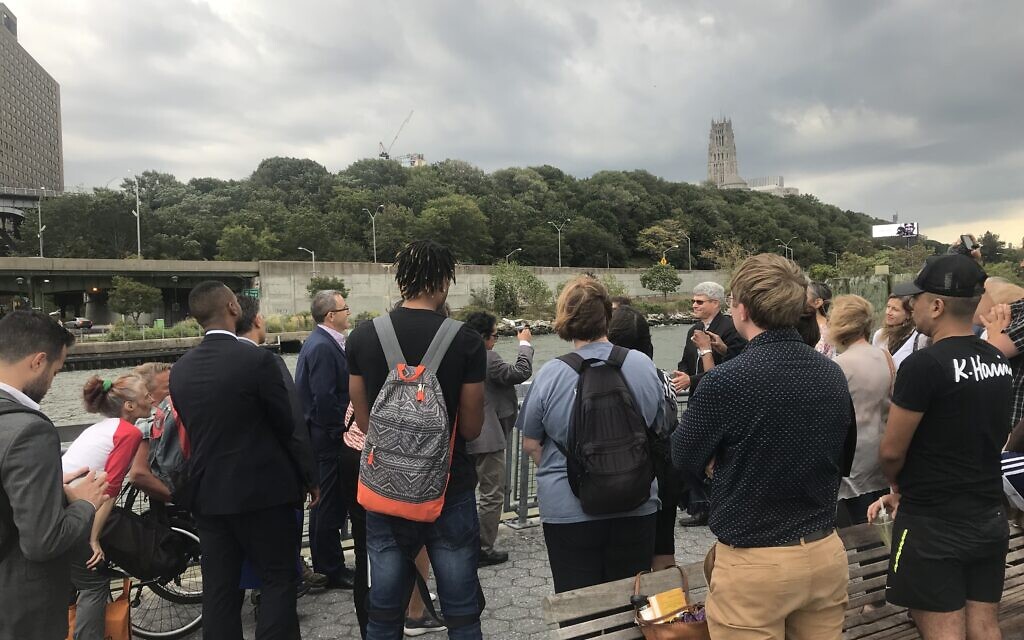 Pouring the water into the Hudson below. Miriam Groner/JW

Steps away from our own wastewater treatment plant, with the New York City skyline on one side and the New Jersey skyline on the other — the Hudson River a border too — Bromberg and Chief Perry poured the water into the waters below. An act of transnational solidarity to honor the life in all our collective waterways.

“Most politicians see the Jordan River as a border,” Bromberg said “We see the river as a bridge.”