“Thanks, no need for February 29”, says Maya calendar to Gregorian calendar.

Ever since the first friars were describing the clockwork of the Mesoamerican calendar system, there has been a hot dispute about whether a 365-day reckoning system could remain fixed to a single solar date. This is because, as we know, a trained observer of the Sun’s year cycle will notice that the Sun returns to its middle point on the horizon after a number of days that fluctuates between 365, 365, 365 and 366.

In the Yucatan Peninsula, Franciscan friar Juan Diego de Landa explained that the Maya calendar accounted for 365 k’in and six hours, the same is said in the contemporary Huichapan Codex for the Otomi calendar. However, the abstract thought required to explain how that actually worked seems to have been absent among Western scholars. Did the six hours (or quarter-day) build up for four consecutive years so to produce an extra day? Did the quarter-day play in the timekeeping immediately after the 365 k’in?

As centuries went by and traditional timekeepers were systematically deprived of maintaining their original timekeeping rituals, it became a convention to say that the Mesoamerican Calendar is imprecise or imperfect. Just as inquisitorial processes accused Maya priests and astronomers of working with evil, their calendar system, a most precious intellectual product, was sentenced to forever lag behind and be useless as an instrument to keep track of seasons and related year-cycle festivities.

After almost two decades of collective research with Otomi, Yucatec, K’iche and Kaqchikel scholars and traditional priests, we have advanced in understanding that the ‘mystery’ of the last quarter-day lies in the role played by the so-called four Year Bearers. They stand in each quadrant of a traditional community and have the key task of counting 365 k’in a quarter of a day later than their neighboring bearer within a four-year cycle. The Year Bearers are reported by friar Landa but are no longer present in Yucatan time keeping. They had specific names and orientations, and people were in charge of activating each Year Bearer from east to north to west to south. In Santiago Atitlan, a traditional Guatemalan community at the feet of two sacred volcanoes by the shore of a lake, it is Maximom who is the keeper of four community wards. His image appears on Figure 1. Every year, he is moved from ward to ward and a new tie is wrapped around his neck to symbolize the completion of a new cycle.

These practices show the importance of rituals in preserving key aspects of traditional knowledge. As reminiscence of the original ways of keeping the calendar in pace with the Sun cycle, they are key today in helping communities recover its harmonious way of relating with natural cycles.

Today we are closer to the day when Maya timekeepers will say, “Thanks, no need for February 29, our ancestors developed their own way of keeping in pace with the Sun!”

Watch this Video to learn more! 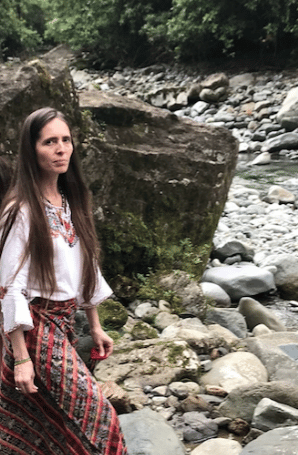 Geraldine Ann Patrick Encina is a Scholar in Residence for Union Theological Seminary and Original Caretakers Fellow at the Center for Earth Ethics. She is a member of the Otomi-Hñahñu Regional Council in Mexico, and a professor of ethnoecology. Born to Chilean parents of Celtic and Mapuche origins, Patrick Encina received her doctorate in ethnoecology and social sciences from El Colegio Mexiquense, A. C. in 2007; she also holds a bachelor’s degree in biological sciences. She has been a visiting professor in Honduras and Argentina, and held faculty positions at several Mexican universities. Her research focuses on archaeoastronomy and cultural astronomy, particularly on ancestral and current ways of measuring and conceiving time and natural cycles in Mesoamerica, especially among Maya, Nahua and Otomian cultures.